Shen Zhen slightly curled his tongue, taking the pill into his own mouth first and then reaching the tip of his tongue towards the girl’s soft lips. He slowly pried them open, tilting his tongue to allow the pill to roll into the girl’s mouth.

He then grabbed the wine at the side of the bed and raised his head to take in a big gulp, pouring the sweet flavor into Chu Jiao, mouth to mouth. Although the girl was still unconscious, she was still able to swallow, and so, she downed the pill smoothly and instinctively. Her little tongue, however, inadvertently blocked the invader, trying to push the big troublemaking tongue out…

Shen Zhen raised an eyebrow. Alright, little girl. I’ll throw you away after I finish playing with you…

The hand he had behind the girl’s head exerted more strength, pushing their faces closer to each other. His lips took hold of the girl’s flailing tongue and his tongue streaked across her palate as if it were stroking a little kitten. It swept across the beds of her teeth and walls of her mouth, eliciting a slight whimper out of the unconscious girl, her tongue moving along with his playful teasing.

After a long kiss, the cheeks of the girl in front of him, had turned into the shade of a fleeting sunset. Shen Zhen’s eyes turned dark as he wiped away the saliva that spilled out of the corner of the girl’s lips with his fingers. He then lowered himself towards her jaw and arrived in front of her chest.

It was currently early summer and the girl’s complicated large-sleeved wedding dress complemented her jade white skin. The big red ribbon tied in front of her chest was lifted by its two loop ends, sticking closely to the man’s black lapel.

The view of a ‘hezi’1Hezi is like the tube top of ancient Tang dynasty history and worn as an inner clothing. 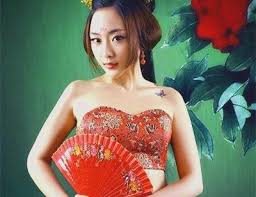 embroidered with rich peonies slowly emerged as the ruqun’s 2 Ruqun is an item of traditional Chinese attire primarily for women but also for men. It consists of a blouse and a wrap-around skirt – Wikipedia. There are two ways to wear ruqun (depending on if they’re cinched at the waist (1st figure) or at the chest (2nd figure). 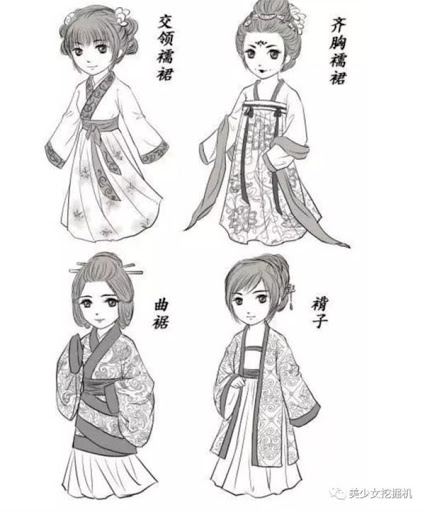 Her soft snow-white chest had red marks which were left by another ribbon to which Shen Zhen brushed his fingertip across, pulling the knot loose. The remaining upper jacket was unable to cover anything up and the girl’s bosoms became faintly discernible underneath the red muslin, revealing itself directly into the man’s line of sight.

Shen Zhen stroked its side, the soft and round feeling stirring ripples in his heart.

He gently fiddled with the tiny red tender bead in his palm and saw it gradually turning erect from his rubbing.

In the quiet room, only the sounds of the red candle crackling were heard and a sweet and unctuous fragrance lingered beneath Shen Zhen’s nose. He followed the trail of the scent and found that it was being emitted from the girl’s body.

Now, he had buried himself in between the girl’s bosoms.

At the moment, the girl’s upper body was only covered with a thin layer of gold-embroidered silk stuck closely to the skin as if it weren’t there…

Shen Zhen did not impatiently take it off, simply licking and sucking the two jade pearls in his hands and kneading them.

The girl’s moans were like an aphrodisiac, once again stimulating Shen Zhen’s new-found desire, and he could already feel his ‘little brother’ roaring. Retracting a hand, he used it to undo his trousers and expose the gigantic and valiant dragon out in the open.

And in this moment, the medicine’s effects had gradually entered her system. The toxins in the body had mostly dissipated, allowing Chu Jiao to slowly awaken.

Shen Zhen, who had never removed a woman’s clothes before, realized that the complicated wedding dress was hard to manage, however, he couldn’t bear his desire any longer, so with a sudden burst of strength, he tore the expensive silk off the girl’s body.

Chu Jiao slowly opened her eyes and was immediately presented with the scene of her wedding dress being torn to pieces by a man.

The light breeze she felt on her chest caused her to lower her head to take a look, her mouth dropping agape in shock.

She immediately covered her chest and glared at the man in front of her.

He didn’t want to be the only one doing all the work.

Although this is a made-up dynasty, the setting of the costumes is basically based on the Tang Dynasty because I really like the refreshing and beautiful chest-cinching ruquns of the Tang Dynasty.

And they’re also easy to take off too hehehe.

By the way, Master Shen’s temper is different from the last few serious and sultry sluts hahahahahahaha.

T/N: Did author just call his previous male leads sluts? Why yes. Yes she did XDDD Because let’s admit it, they all simped for Chu Jiao kek