Chu Jiao had managed to let the old matriarch and the first madame suffer an unspoken loss through the kitchen incident. She even set up a small kitchen inside her Ting Yu Pavilion in the Eastern courtyard.

Ever since Chu Jiao’s arrival, the third household’s quality of life had greatly improved, regardless of whether it was in the quality of food or clothing budgets. Compared to before, there was a world of a difference.

Of course, this was also due to Chu Jiao’s generous spending habits.

Meanwhile, Shen Zhen, who had never cared for these, could also feel the changes occurring in the process.

Although he was not a hedonist1A person who believes that the pursuit of pleasure is the most important thing in life; a pleasure-seeker., his only purpose of staying in the Shen Manor was to watch it burn before his eyes. As such, he would never care for Zhu shi’s usual hostility, as long Zhu shi didn’t touch his bottom line, he wouldn’t care at all.

During this period, Shen Zhen was busy dealing with an important matter. The small candle flame in the study burned through the wick every night. It never stopped even until the wee hours.

From the start, Chu Jiao had instructed Hong Xiu to follow Shen Zhen’s movements, so she naturally knew how busy he was right now.

Ever since that night their bare skins touched, they had never been placed in a situation where they were all alone.

On the surface, Shen Zhen always looked like a humble gentleman, scrupulously abiding the distance a father and her daughter-in-law should have, and never stepping out of bounds. However, Chu Jiao could always feel a burning gaze on her whenever they met.

Hmph, she didn’t want to take the initiative anymore.

Every time Chu Jiao looked at that handsome face, her heart would beat erratically. Adopting a half-hearted attitude, she prepared her father-in-law’s food and clothing every day with utmost care, so that he could always be reminded of her every time he looked at the things around him, yet still found it difficult to see her.

Chu Jiao did not know whether she was courting disaster by doing this, but for now, the results seemed to be satisfactory.

“Third Young Madame, I’m sorry to disturb you this late.”

At the height of summer, when the weather was sultry and unbearable, Chu Jiao took a shower and was now cooling off in a small shade within the courtyard when she saw Shen Zhen’s personal servant breathlessly running over to her.

“Third Young Lord has just returned to the manor and wanted to eat the thousand-layered snowflake ice2A fancy name for shaved ice you made.”

After Shen Zhen became an official, he would often receive rewards from the emperor, and the rewards had piled up in the warehouse of the Eastern Courtyard, sitting in the dark and gathering dust. It was only until Chu Jiao had arrived that they could finally see the light again.

From the room full of treasures, Chu Jiao found a rare item called Bing Jian3 Bing Jian: the icebox of the ancient period. (Pic below) 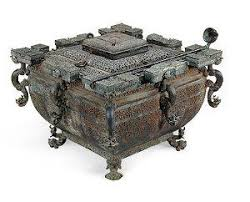 . So when the sweltering summer had arrived, this little diamond in the rough had finally come to use.

The thousand-layer snowflake ice that Shen Zhen was referring to was a smoothie made by Chu Jiao using the Bing Jian. Although smoothies were very common to see in modern times, it was very new and exciting to see during the current ancient period. It tasted cool and delicious in summer, bringing a refreshing feeling to the mind and body.

Unsure of whether it was a coincidence or something else, the He Sinian from the previous world also liked eating sweets, the same with the Shen Zhen of this world.

Chu Jiao instructed Lu Huan to go to the small kitchen to prepare a smoothie and also took some food with her, but she did not hand them over to Fu Lai. Instead, she unexpectedly walked along with him towards the Ting Feng Pavilion where Shen Zhen resided.

“You can leave, I will serve this to my father in person.”

Once they arrived in front of the study, Chu Jiao inconspicuously whispered this into Fu Lai’s ears.

Fu Lai originally wanted to say that only certain people were allowed to enter the study room but the study room’s door suddenly flung open.

Fu Lai respectfully nodded his head saying ‘yes’ before retiring. Outside the study room, only Chu Jiao remained, firmly holding the food tray and staring silently at the tall man with a small smile.

“Cough,” Shen Zhen faked a cough, partially covering his mouth with his fist. “The summer wind is strong. You should come in first.”

As Chu Jiao lowered her head, taking a side glance at his upright sleeve, the corner of her mouth hooked up.

What wind was he speaking of?