Chu Jiao experienced the full brunt of the neglect the three branches of the Shen Family gave to Shen Zhen.

Since they hadn’t been disturbed the previous night, she quickly assumed that it was because Shen Zhen had already dealt with the people outside her room. As a result, when she woke up early in the morning, the maid, who was supposed to be keeping a watchful eye outside, was lazily sleeping in the side room. The momo1Momo(嬤嬤) is term used to refer to an older maidservant , who took care of the new bride’s life, negligently brought in water that had already turned ice cold. The courtyard of the outer room was messily scattered with dead leaves. From their attitudes, it was evident that their servants were very disorderly and inattentive, it simply made one speechless.

However, she was completely unaware that this was the result of Shen Zhen’s deliberate indulgence.

The original owner’s personal maids and momo were conveniently assigned somewhere else by the head housekeeper yesterday. Since Chu Jiao knew that the male lead didn’t have any pleasant feelings towards the Shen family, she didn’t hesitate to use Shen Zhen’s name to directly call in the main housekeeper, Shen Liang. Chu Jiao flew off into a furious rage, shamelessly blaring at him in front of all the servants and asked for her maids to be rightfully returned to their proper place.

Shen Liang left with an unsightly face, and Chu Jiao didn’t even need to think twice to know that he must’ve gone running to the first madame to tell on her.

She was completely unconcerned and started dressing herself up.

Seeing that she possessed a tall nose and big almond eyes, Chu Jiao was elated to have a face with such deep-set features. Well, it was natural for anyone who discovered that they suddenly had a big beautiful face, to feel a bit cheerful.

The original owner’s father was a wealthy merchant who had been doing business in the Northwest for decades, while her mother was a beautiful Hu entertainer bought by her father. As such, she had the appearance of one with mixed descent. Compared to the girls from the rich families living in the Central Plains or the pretty daughters coming from a humble lineage, she had an unconventional type of heartmoving beauty.

Chu Jiao instructed her maids to choose the most conspicuous and expensive set of ruby ​​head ornaments and dress her with a pink and silver ruqun. On top of it, she draped on a beautiful wide-sleeved gown, carefully embroidered with hundreds of thousands of elegant lotuses. She then drew a delicate-looking flower in between her brows2Flower in between the brows (花鈿妝) like the below picture 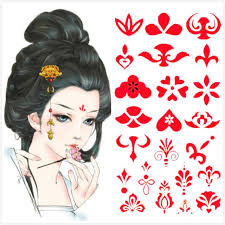 and painted on rouge on her lips. The dazzling beauty in the mirror caused the faithful servant Lu Huan, who had always been by her side, to gape in awe.

“M-Miss… I mean, Madam… You’re… too beautiful! Xiao Lu3 Xiao means Little. has never seen you look this beautiful before!

Chu Jiao happily hooked her lips into a smile, agreeing with the compliment.

Originally, Xiao Lu was supposed to help her dress up but halfway through, Chu Jiao felt something amiss. The original owner lived in the Northwest all year round. Her skin was a little rough and wasn’t considered fair, so Xiao Lu blindly applied pale white pearl powder on her and had drawn slender willow eyebrows on, greatly reducing the original owner’s beauty from an 8 to a measly 5.

In any case, she was still a woman who had learned the modern way of putting on makeup. Even though her skills weren’t to the point of making it look like she had plastic surgery, at the very least, she knew how to shape her face and lay her base, capable of choosing the most suitable brow shape and lip color for herself.

Instead of deliberately covering up the original owner’s glowing skin color, she focused on highlighting the obscured points of her facial features and painted on a beautiful and strong peach blossom themed makeup. Her whole person appeared magnanimously beautiful and radiant.

After being satisfied with her work, she gracefully stood up and straightened her back.

“Let’s go meet the husband and serve tea to greet the clan elders.”

The three bedrooms in the East wing weren’t spacious, and her nominal husband, Shen Zhongxing, was staying in the Pine Soughing Courtyard on the left.

As soon as Chu Jiao entered the courtyard, the strong fragrance of medicine immediately assailed her nostrils. Under the guidance of a servant, she was led into the room and the view of the frail and thin Shen Zhongxing lying in bed, entered her sight.

He ought to be around 15 years old. And despite his handsome yet delicate features, his fragility couldn’t be concealed. Chu Jiao recalled that the original owner had just reached the marriageable age4 Marriageable age back in Ancient China was 15 years old. It’s a lot lower than the modern era due to the average lifespan back then being 40 years old as a result of lower medical advancement and profession. In fact, in Ancient China, once a woman passes the age of 18, she would already be considered ‘too old.’ . In the modern world, they were still considered to be children, but in ancient times, they were already at the age where they could get married.

The servant called out to him softly and properly explained to Chu Jiao that the young master had suddenly coughed up blood last night and subsequently lost consciousness for the whole night; hence, he was unable to participate in the ceremony.

Chu Jiao nodded without giving it much thought and quietly watched as Shen Zhongxing’s eyes slowly opened, feeling some sympathy for him in her heart.

To be born in such a big family where his marriage was controlled by others, even living would become all too tiring.

He was just like her who felt helpless once she learned that she was just a character in a book who couldn’t even control her fate.

After carrying out her greetings to Shen Zhongxing, this was the first time that the husband and wife had met.

But, Chu Jiao could feel that Shen Zhongxing was not interested in her at all. Instead, his eyes often rested on the yellow-clothed maid, who was always taking care of him.

Chu Jiao didn’t plan to have any more contact with this husband. Her ultimate goal was not him after all. It would be best if the two of them could share mutual respect.

She stepped forward and helped support Shen Zhongxing into a wheelchair together with the servant.

On the other side, Shen Zhen, who didn’t rush home until early in the morning, happened to bump into Shen Zhichang and his wife in the main house at the secondary gate.

Shen Zhichang said ecstatically, “What good timing. Today, the new bride will be serving us tea, and you, as the husband’s father, came just in time.”

Shen Zhichang did not feel any injustice for his biological son because apart from Shen Zhongxing, he still had five children in total born from his wife and concubines. As such, Shen Zhongxing was merely nothing more than extra baggage in his eyes. And without question, Shen Zhen also did not have an ounce of concern for this baggage of flesh.

Instead, it was Shen Zhichang’s wife, Du Shi, who still thought of Shen Zhongxing from time to time. After all, he was the baby that came from her body. No matter what, she still had to take a good look at her son’s new wife that the Old Matriarch Zhu had picked out.

Shen Zhen greeted his brother and sister-in-law politely which he always did according to the standard etiquette without fail.

He quietly followed the two to the lobby, harboring some suspicions of the current situation.

What was going on? Zhongxing…had also gotten married last night?

And as he sat upright in the middle of the main hall, he stared blankly at the slim and graceful Chu Jiao, smiling with charm, and walking towards him slowly. His ominous premonition…had come true.

Shen Zhen: My heart, at this moment, has crumbled into tiny pieces.

T/N: There’s a lot of little theaters in this arc and they’re pretty much one of the best comic reliefs u get XD